The most successful way to be a gold producer may be to not operate any mines.

At least, that’s the business model of DRDGold Ltd., the best-performing stock on the MSCI ACWI Select Gold Miners Investable Market Index this year. The company, which specializes in recovering gold from mine dumps in and around Johannesburg, has surged 271% in 2020, also making it the biggest gainer on South Africa’s FTSE/JSE Africa all share benchmark.

“Everybody is flocking to the arms of gold,” Niel Pretorius, chief executive officer of DRDGold, said in an interview on Tuesday. “And because our company does provide exceptional gearing to the gold price, and it is traded at a multiple to movement of the gold price, it is always a favorite pick.”

With the pandemic spurring demand for haven assets and central banks pumping unprecedented levels of stimulus, gold has surged to a record high, boosting shares of producers. Also helping DRDGold this year was a 1.1 billion-rand capital injection as Sibanye Stillwater Ltd. boosted its stake in the company, as well as the stock’s re-inclusion in the VanEck Vectors Gold Miners ETF.

“It was almost like a perfect storm from the perspective of our company,” Pretorius says. “If you can’t take advantage of that then you don’t have a business.”

DRDGold’s fortune is turning after a tepid first half of 2019 that saw the stock fall as much as 20% and it was removed from the VanEck gold ETF. Still, the stock more than doubled last year after the company began buying back shares, posted a rise in operating profits and paid its highest annual dividend since Bloomberg data going back to 1996.

With gold’s meteoric rally driving up the FTSE/JSE Africa Gold Mining Index 131% and into the overbought territory this year, there may not be much room for further gains unless the precious metal trades higher, according to Pretorius, although he’s optimistic over the metal’s prospects longer term.

“If gold prices stay at current levels, I would be surprised to see very significant increases in the share prices,” he said. “If the sentiment turns against gold, there could be some big losses.”

For now, DRDGold intends to keep processing tailing dumps. The company, which started mining in 1893, no longer has shafts or underground works, according to Pretorius. Instead, it’s focusing on the unmaintained sand mine dumps dotted around Johannesburg, which environmentalists say seeps toxic material into surrounding areas — the legacy of 130 years of gold extraction from the fabled Witwatersrand basin.

“Our job will be finished when all these dumps in Johannesburg are either removed or for the ones that have to stay behind, they are fully cleared, and they are fully rehabilitated so that there is no dust and no water comes from them,” Pretorius said

Bullion prices rose for a fifth session Thursday, up 0.6% to a fresh record, while the rand price of the metal extended gains for a 16th consecutive day to a new all-time high. South African gold stocks, however, eased 0.4% by 11:40am in Johannesburg, with DRDGold falling 1.9%. 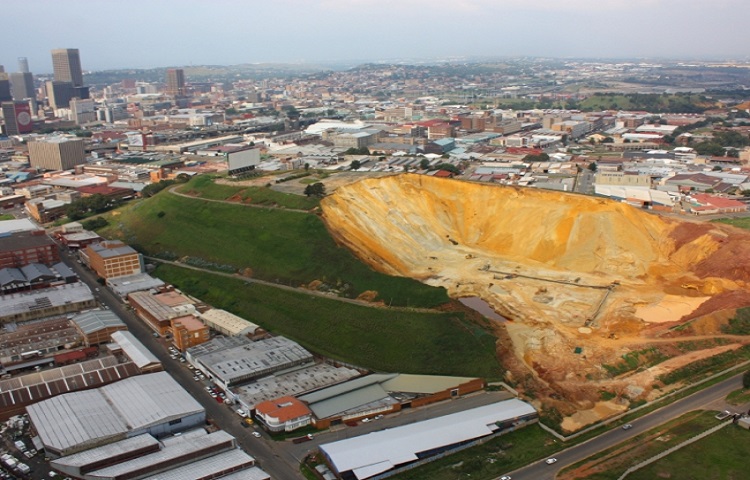